Statement by Roger Blobaum, Center for Science in the Public Interest
Presented to the Subcommittee on Research and General Legislation Senate Committee on Agriculture
Washington, D.C.
March 22, 1990

Mr. Chairman, I am Roger Blobaum, director of the Americans for Safe Food Project of the Center for Science in the Public Interest.  CSPI is a nonprofit organization that has 200,000 members nationwide and advocates improved health and nutrition policies.  We actively support policies that encourage the production and marketing of food grown with minimal use of chemical inputs, locally-grown food, and certified organic food. I appreciate this opportunity to present our views on S. 2108, the Organic Foods Production Act. 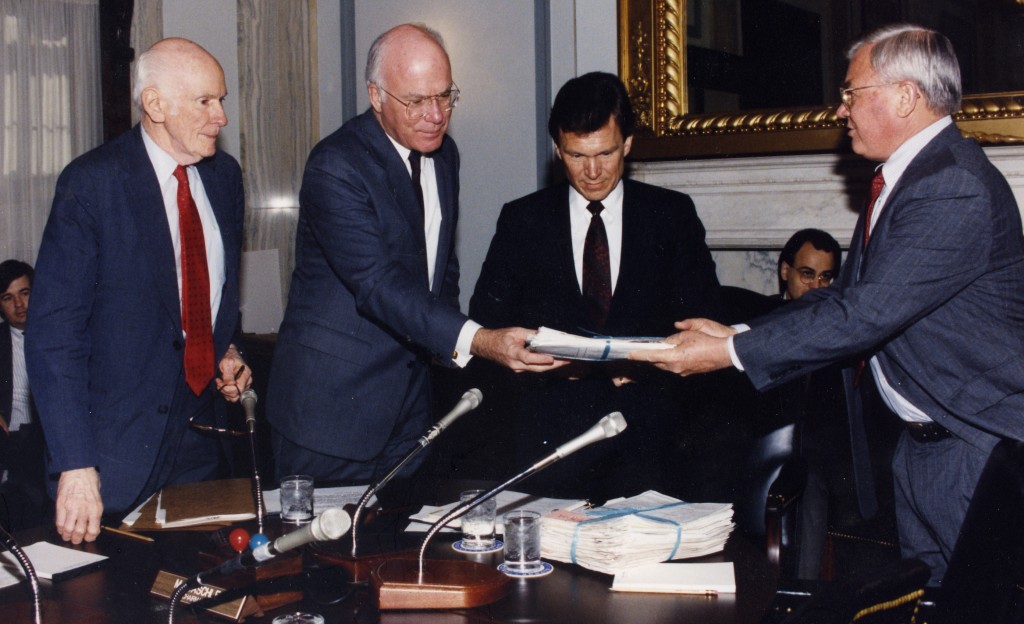 I want to begin by presenting petitions bearing signatures of 136,000 consumers who support the purposes of this bill. These signatures were gathered throughout the nation in 1989. Individuals circulated and signed the petitions to demonstrate their strong desire for a national program to set organic standards and to promote the production of organically-grown food.

We commend Senator Patrick Leahy for proposing this comprehensive legislation, the first of its kind in the Senate, and for actively soliciting input from consumer, environmental, organic grower, and other organizations during its development. Although we support S. 2108 in its present form, we are taking this opportunity to suggest changes that would make it even better.

Establishing a completely new program through legislation requires important trade-offs.  We believe this bill strikes a reasonable balance between strong national standards that guarantee the integrity of the organically-grown label and the ability of organic growers to meet them; between the authority given to the Department of Agriculture to implement this program and the constraints needed to prevent it from watering down the national list of permitted inputs and practices; and between the desire to delegate program authority to the states and the need to guarantee the independent status of public, private, and private/public certification agents.

We are very uneasy about delegating implementation authority to a federal agency long perceived as being officially opposed to organic agriculture.  We urge you, therefore, to make this bill much more specific than most farm legislation and to give as little discretionary authority as possible to the federal and state officials who will implement it.

Because of this concern, we urge you to strengthen the national organic board provided in Title II.  We would like to see this board significantly reduced in size, and we would like it to have more monitoring and regulatory authority.  This scaled-down board should be given jurisdiction over the organic standards board provided and over a similar accreditation board that we believe should be established to oversee the certification agent accreditation process.  Sufficient consumer representation should be required on these boards to assure that those who purchase organic food have an effective voice in the decisions made.

For similar reasons we support the bill’s provision for citizen suits that would enable consumers to go to court to enforce the standards specified in this legislation.  We are not convinced that USDA will have the inclination or the resources to guarantee the level of enforcement needed to ensure the integrity of the organic label.  There is precedent for citizen suits in existing state organic statutes, they are included in most national environmental legislation, and they have been effective in getting laws enforced.  We feel it is both necessary and appropriate to provide them in this program.

National standards that facilitate the movement and sale of certified organic food in interstate commerce are one of the important features of this bill.  It is essential at the same time, however, to guarantee the right of states to adopt standards more stringent than those this bill provides.  The federal legislation should provide minimum standards that must be met by those using USDA’s organically-grown label.  States that want to adopt stricter standards and provide their own label as well should have the right to do so.

Probably the most difficult challenge this bill addresses is providing a method of establishing and maintaining a national list of approved organic production inputs and practices. Although some feel a strict synthetic vs. natural definition should be adopted to determine what should be approved and what should be banned, we feel this is unrealistic and falls far short of what is needed.  This definition is inconsistent and difficult to defend since it is based on historic use rather than on scientific evaluation.

The criteria for putting something on the list or taking it off should be whether or not the input or practice causes adverse human health or environmental effects.  The criteria must be specific and quantifiable.  It is essential that the bill provide a formal science-based process, including the right to petition and appeal, for making these determinations.  It also should protect growers from sudden and arbitrary list deletions that would make it difficult on short notice to find alternatives.

We endorse the provision allowing demonstrations of a “transition” label for production that meets all organically-grown requirements except completion of the required 3-year withdrawal from use of synthetic fertilizers and pesticides. Although the extent of consumer acceptance of a “transition” label is not known, we believe it would be useful to find out whether food bearing this label will command a higher price and provide a financial incentive to farmers making the transition to organic methods.  We have serious reservations about demonstrating a “low input” label because we feel it cannot be defined in a way that is meaningful to consumers.  For that reason, we recommend dropping this provision from the bill.

Expanding consumer interest in organically-grown food makes this legislation timely and necessary.  This expansion is documented by national surveys.  A new Harris Poll released this week shows 30 percent of those surveyed had made changes in their food buying habits, 28 percent had sought out organic produce or produce grown with limited use of chemicals, and 44 percent reported they would pay more for organically-grown produce. The Fresh Trends 1990 consumer survey conducted by The Packer, the trade publication of the produce industry, found that 26 percent of the consumers surveyed reported they had changed their food buying habits because of chemical residues.  A majority said they preferred organically-grown food even if it cost more.  And 11 percent said they had sought out and purchased organically-grown food in 1989.

High prices and limited access to organically-grown food have been cited in recent surveys as serious consumer problems. It seems clear from the evidence available that consumer interest is high enough to support the niche market for organic food that now exists.  It also appears likely that this market will develop into something much more substantial in the future.

Certified organic food is becoming an important value-added farm product.  The actual farm value is difficult to document because so much organically-grown food is sold directly to consumers, marketed in negotiated arrangements with small volume buyers, or simply sold as conventional food.  A natural foods industry survey shows the volume sold in natural food stores quadrupled over the last 10 years.  The most comprehensive study available, completed recently by Market data Enterprises and reported in The Wall Street Journal, shows organic food sales jumped 40 percent in 1989 to a level of $1.25 billion and are expected to increase another 34 percent this year.

We believe S. 2108 provides important food safety, environmental, and market development benefits.  There is strong evidence that it will encourage environmental stewardship, provide important assistance to the emerging organic food industry, provide market incentives to encourage the adoption of organic and sustainable farming methods, and facilitate interstate commerce in fresh and processed organically-grown food.  We urge you to recommend passage of this important and timely legislation.

From 1989 to 1992, Mr. Roger Blobabum was the national director of Americans for Safe Food, a project of the Center for Science in the Public Interest (a 230,000-member health and nutrition advocacy organization.) His work included organizing annual national organic/sustainable agricultural conferences in Washington, organic and sustainable agricultural initiatives in 12 states, and helping shape the 1990 Organic Foods Production Act and push it thorough Congress.