From 1964-1966, Roger Blobaum served as a press secretary and legislative assistant to U.S. Senator Gaylord Nelson (D-Wisconsin.) Documents relate to work developing and promoting legislation to ban the manufacture of DDT, a new conservation title that was included in the 1965 farm bill and some text of pesticide issue interviews of Senator Nelson.

Mr. NELSON. Mr. President, I now introduce, for appropriate reference, a bill to ban the manufacture of DDT for any use in this country.

DDT was first used in the 1940’s to con­trol mosquitoes, flies, and other disease carriers. But strains resistant to the pesticide developed, making spraying less effective. DDT also was used on farm and forestland insects but some of these also developed resistance. END_OF_DOCUMENT_TOKEN_TO_BE_REPLACED

WASHINGTON, D.C.  — Senator Gaylord Nelson has urged the U. S. Department of Agriculture to stop recommending DDT for use by home gardeners, farmers, and others in combating insect pests.

“In view of the overwhelming evidence of damage to the environment and the dangers of DDT contamination of feed and food,” Nelson wrote Secretary of Agriculture Freeman,  “I would appreciate your comments on the possibility of dropping DDT as a recommended pesticide in all cases.”  Nelson’s letter to END_OF_DOCUMENT_TOKEN_TO_BE_REPLACED 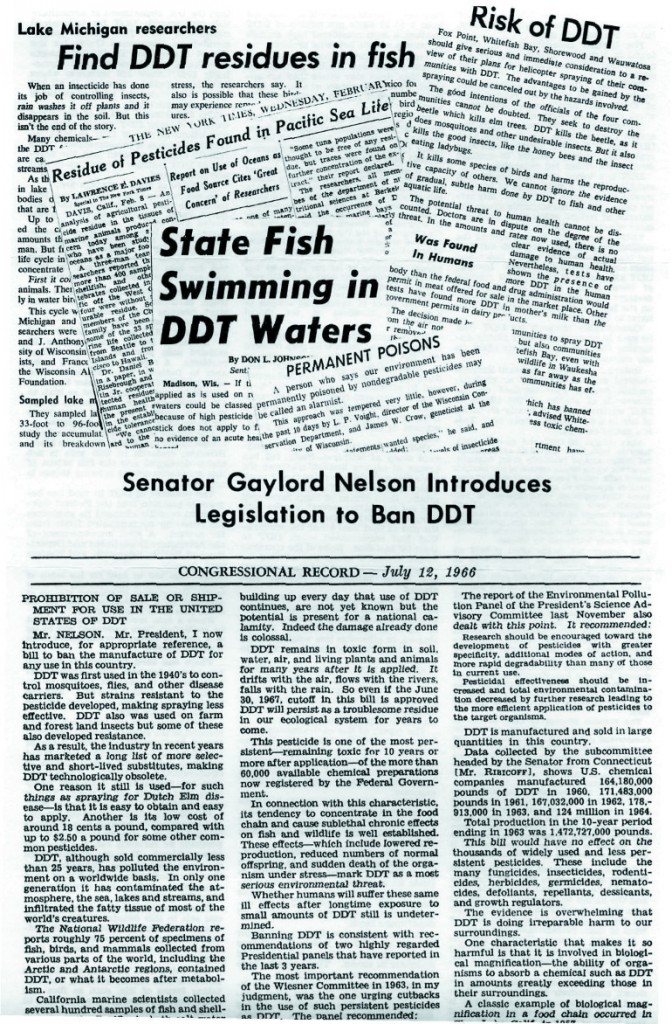 1966 DDT News Clippings from the collection of Roger Blobaum

STATEMENT OF SENATOR GAYLORD NELSON TO SENATE AGRICULTURE COMMITTEE ON S. 1702, A BILL FOR A LONG-TERM CROPLAND ADJUSTMENT PROGRAM TO ASSIST PRODU­CERS IN DIVERTING CROPLAND TO CONSERVATION USES, AND FOR OTHER PURPOSES.

Summary: Testimony statement of Senator Gaylord Nelson to Senate Agriculture committee on S. 1702, a bill for a long-term cropland adjustment program to assist producers in diverting cropland to conservation uses, and for other purposes. Written by Roger Blobaum, staffer for Senator Gaylord Nelson. END_OF_DOCUMENT_TOKEN_TO_BE_REPLACED