Much of this collection deals with the campaign’s organic committee, which was the organic policy arm of the campaign and the main organic advocacy group influencing federal organic policy and appropriations. The collection includes action alerts relating to helping shape and implement farm bills, monitoring and influencing the National Organic Standards Board and the National Organic Program, and influencing organic issues overall. 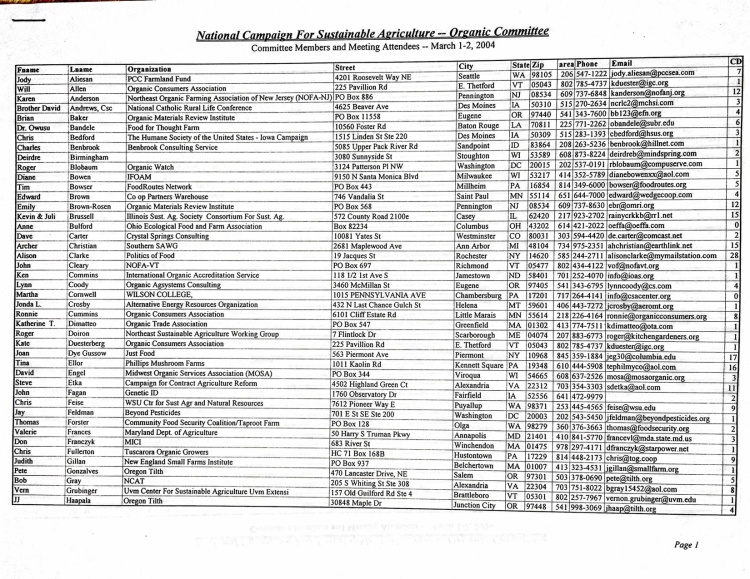 END_OF_DOCUMENT_TOKEN_TO_BE_REPLACED

Each of these groups has its unique history, organizational path and scope of work. Yet, they all come together to forward their common goals.

END_OF_DOCUMENT_TOKEN_TO_BE_REPLACED

The Campaign for Sustainable Agriculture, a national farm policy initiative supported by WSAA and more than 400 other national and grassroots organizations, has become a significant force in the ongoing process of influencing the agriculture appropriations process and shaping a new five-year farm bill in 1995.

The campaign is mobilizing support for existing funding levels for organic and sustainable agriculture programs and for adoption of new farm policy options that reward, rather than penalize, good stewardship of land and water resources.

These options were developed in a national participatory process initiated by representatives of environmental, consumer, animal protection, organic farming, sustainable agriculture, and other organizations in 1992.  The small group that started the process included WSAA board member Fred Kirschenmann and WSAA Associate Director Roger Blobaum.

In addition to presenting packets of information on reform options to all 535 members of Congress and describing these options to the press in mid-March, campaign participants will discuss them in small meetings with lawmakers in their states and districts during the three-week Congressional spring break that began April 7.

The stewardship options include 1) converting existing annual set-aside programs to a multi-year conservation-based program that would reward farmers who cut production in ways that benefit the environment; 2) removing program disincentives to sustainable agriculture practices and establish an option that provides payments for crop rotations, rotational grazing, and similar practices, and 3) providing additional payments to farmers in watersheds with serious soil and water conservation programs for development and implementation of whole farm resource protection plans.

Chairman Richard Lugar of the Senate Agriculture Committee has completed a series of hearings that focused on a critical review of all farm programs.  Chairman Pat Roberts of the House Agriculture Committee has scheduled some hearings after delaying early farm bill action.  The Clinton Administration has proposed continued funding for existing organic and sustainable programs but so far has declined to submit any farm legislation to Congress.

The Administration has lacked official leadership at the U.S. Department of Agriculture, where these proposals would originate.  Dan Glickman was confirmed March 31 as the new Secretary of Agriculture, filling a position that has been vacant for three months.