Book Chapter in “Food For People, Not For Profit” – Wresting Agriculture from Corporate Farmers | 1975 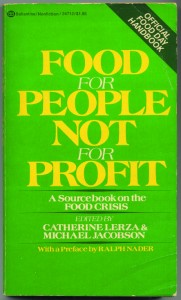 The issue of corporate involvement in agriculture and concentration of land ownership is the farm policy issue of the 1970’s . . .

A recent Minneapolis Tribune poll showed 76 per­cent of the people saying they consider the family farm an efficient method of food production, 95 per­cent feeling it is important to continue the family farm as a way of life, and 57 percent saying they feel corporate farming is a bad development. Yet 71 per­cent said they felt that corporations will be producing most of the nation’s food by the end of this century.

In other words, they consider the family farm both a valuable and efficient institution and a lost cause . . . We hear so often that this trend toward bigness and corporate involvement in agriculture is inevitable. It is inevitable only if we continue to drift along and don’t do anything about it.

The government tilts the policy balance between the family-type farm and the corporate approach. The trouble is that the government, while issuing policy  statements praising the family farm, is doing more than any other institution in America to destroy it.

The Agriculture  Department, once the farmer’s voice in Washington, is under increasing attack for becoming too cozy with agribusiness. There is ample evidence these attacks are justified. USDA, for exam­ple consistently plays down the growth of vertical Integration and other corporate involvement in agri­culture. It still promotes an Economic Research Serv­ice study on corporate farming that has been repeatedly discredited because it is based on incomplete, mis­leading and poorly analyzed data.

A follow up study by Prof. Richard D. Rodefeld of Michigan State University turned up glaring inaccu­racies in the basic data. In an analysis of all corpo­ration tax returns filed in Wisconsin (a state where these are public records), he found, among other things, that USDA had missed 252 farm corporations altogether.  He also found that  USDA had under­estimated the total number of acres actually owned by corporations by 37 percent, acres rented by 26.9 Percent, number of cattle fed by 30 percent, number of milk cows by 54 percent, number of sows by 21.6 per­cent and acres of vegetables by 37 percent. Since exactly the same research procedures were used by USDA in surveying corporations in all the other states, Rode-concluded, similar levels of inaccuracy would be expected for these states as well.

Rodefeld referred specifically to much-publicized statements by Secretary Earl Butz that less than 1 percent of our total farms are corporate farms and about six out of seven of these are actually family farms.

Rodefeld points out that the USDA study classed corporation farms into two categories, those with 10 or more shareholders and those with less than 10, and then arbitrarily and incorrectly concluded that those with fewer than 10 shareholders were all family farms. The study also failed to include the many large operations with absentee   owners, hired managers, seasonal laborers, and   all  other  characteristics of corporation farms—except the formality       of filing in-in­corporation papers.

However, if the family farm is defined a one owned and managed by an individual or family, who must also do the majority of the work, he added, then only 34 percent of the Wisconsin farm corporations in the USDA study were actually family farms. Rodefeld concluded that the effect of the USDA study has been to vastly understate the size and impact of corporation farming.

A closer look disclosed that all the Department had actually done was solicit the views of commodity specialists on its Washington staff as to whether vertical integration had increased. Nothing even resembling research was involved and the report actually conceded that no one at USDA really knew the facts for sure. Yet that study, too, is passed off as research and farm editors and high USDA officials have given it wide distribution. . . .

In another area, land ownership, USDA has done little or nothing.  Both Sen. Gaylord Nelson (D-Wis.) and Sen. Adlai Stevenson III (D- Ill) concluded after extensive Congressional hearing that we have no idea of who even owns the land in this country.

We all know the dangers of a land monopoly and the exploitation and social upheaval associated with con­centrated land holdings in other nations and civiliza­tions. The diffusion of land ownership in this country, and a challenge to the moves toward a land monopoly, must have the highest priority.One official move in remedying this situation is the 1971 land reporting law enacted in Minnesota. It requires all corporations owning or leasing farmland to file a report on these holdings by March 15 of each year. These reports are filed with the secretary of state and made available to the public.

This proposal should be pushed in state legislatures across the nation as a basic first step in determining the extent of corporative involvement in agriculture.

There is ample precedent for state legislation to control corporation farming and court decisions over the years have upheld these controls.

North Dakota has prohibited all types of farm cor­porations since 1932. An attempt to legalize closely held farm companies was defeated there in a refer­endum in 1968. It is interesting to note that the vote against corporate farming in the referendum was sub­stantially higher than the original vote in 1932 that put on that ban.

The Kansas Legislature in 1931 approved legisla­tion to bar corporations from producing wheat, corn, barley, oats, rye, potatoes and milk. It was amended in 1965 to add grain sorghum to the prohibited list and to provide an exemption for closely held corpora­tions of less than 5,000 acres.

In Minnesota, corporations engaged in farming may not acquire more than 5,000 acres. Texas corporations are not allowed to engage at the same time in cattle production and meat packing.

Also needed in all the states is an antitrust law patterned on the Family Farm Act, which was in­troduced in Congress for the first time [in 1972]. It is an attempt to legislate non-farm corporations out of agricultural production.

This legislation, which had a hearing in Congress] [in early 1972], would have prevented further move­ment into food production by corporations and [would have] required them to divest themselves of their present] farm holdings. (That hearing record, which include some excellent presentations by opponents of corporation farming, is available from the House Judiciary Committee, House Office Building, Washington, D.C| 20515.)

Specifically, the bill provides that any corporation involved in processing or marketing that has $3 mil- lion or more in assets, or any individual owning $31 million of stock in such a corporation, could not be involved at the same time in producing food. (Editor’s note: The Family Farm Act never made it out of committee. An effort to pass such legislation in the 94th Congress is expected, however.)

This antitrust bill was written so it would exempt farm cooperatives and certain charitable, educational and research institutions. They are exempt as long as their farming activities are related to this work and are not for profit. It is entirely consistent with our adopted antitrust, anti-monopoly policies to forbid integrating of food production from the soil to the grocery store shelves and to require food processors and distributors to compete and keep their facilities open for production of the independent producer.

Those critics who contend our present laws already  provide the necessary restrictions have failed to cite a single instance where either the Justice Department or the Federal Trade Commission has successfully prosecuted a violator.

We also need action in Congress and at the state level to stop the practice known as tax-loss farming. What this involves is a way for wealthy investors to avoid taxes by converting normal income into capital gains taxable at much lower rates. Government spokes- men in the Treasury Department and elsewhere have been contending that a modification of the 1969 Tax Reform Act took care of this problem. This doesn’t appear to be supported by the facts, however. The Agriculture Committee of the National Planning As­sociation; for example, recently issued a report that shows this legislation has had virtually no impact on this kind of tax avoidance.

We also need legislation to limit payments in agri­cultural and other programs to family-size farms and ranches. This would include a $10,000 ceiling on gov­ernment farm program payments . . .

We need enforcement of laws already on the books that limit government-subsidized irrigation water to 160 acres per person, or 320 acres per family, and which require the recipient to actually live on the land involved. These restrictions, adopted in 1902, may now be successfully flaunted by wealthy absentee landowners.

There are now many allies outside agriculture who are getting into the fight against agribusiness. They include young people (who find it increasingly difficult to get on the land); labor unions (who fear growing corporate monopoly and its eventual effect on food prices); environmentalists (who oppose the growing use of chemicals and fear the effects of monoculture), and consumers (who recognize the price-setting pos­sibilities of a concentrated corporate industry).

* Roger Blobaum, an Iowa economic consultant, delivered the paper from which this article is excerpted at the first National Conference on Land Reform, sponsored by the National Coalition for Land Reform, in 1973. This version of Blobaum’s paper appeared in Environment Action Bulletin.