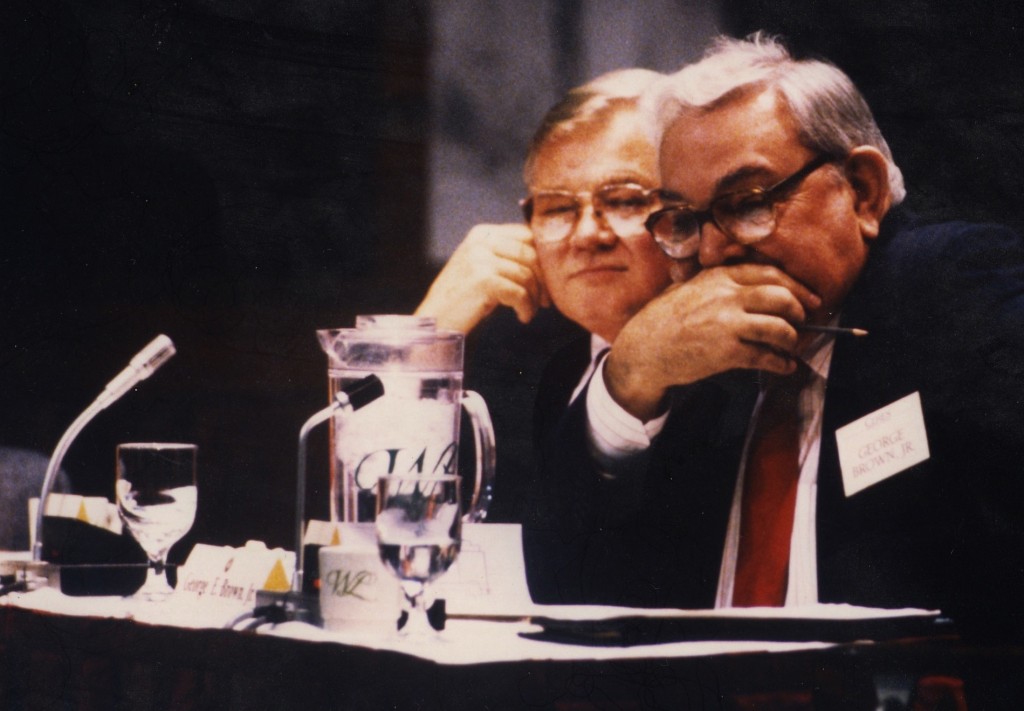 Roger Blobaum, National Director of Americans for Safe Food, a project of the Center for Science in the Public Interest and Congressman George Brown, Jr.

We were pleased to accept your invitation to participate in this food safety panel and want to thank you for giving it a prominent place on your program.  Consumer pressure, as you know, is pushing the safe food issue higher on the political agenda in state capitals and in Washington.

We still see people in high places who feel concern over safe food is a fad or an aberration.  A good example is a recent statement by a Bush Administration farm advisor, who said the way to convince people food is safe is to keep saying it over and over again.  I can assure you that consumers are in no mood to accept that kind of response.

For the most part, fad or not, policymakers are feeling some heat on this issue and many are taking it seriously.  It’s likely the pressure to act will increase as we see more and more reports regarding pesticide pollution of groundwater resulting from normal farm chemical use.

Many in agriculture are angry and frustrated.  Many feel they have been blindsided by uninformed television network people and Hollywood figures like Meryl Streep.  They are defensive and seem to be dug in for what appears to be a losing political battle.

It’s easy to underestimate the intensity of public concern. This concern makes it easy for people to believe what they read and hear about things like pesticide residues in food.  Consumers are riled up and they want something done that will reassure them about food safety.

It is in agriculture’s best interest, in my opinion, to adapt and respond.  I don’t believe this is a fad.  Concern is amply reflected in several national surveys that were conducted before Meryl Streep started advising consumers to wash their broccoli with soap and water.

The Food Marketing Institute, for example, found in its last annual survey that 82% of food shoppers believe pesticide residues are a serious health hazard.  That’s up seven points from the previous year.  Also ranked high was antibiotics and hormones in meat.

The Packer, the produce industry publication, found in a survey that one of every five consumers has already responded to safe food concerns by purchasing food marketed as organically grown or pesticide free.

Some say safe food extremists are to blame for what people say when they’re interviewed by poll takers.  Let me touch briefly on three sources of consumer information.  I hope you will agree with me that these are not extremist groups.

—The General Accounting Office, the investigative arm of Congress, has issued a series of reports highly critical of the government’s efforts to monitor pesticide residues or to take action when illegal residues are found.  The GAO found, for example, that FDA’s testing program completely misses a number of pesticides with moderate to high-risk potential.  The reports also concluded that FDA doesn’t keep most adulterated food off the market and doesn’t take enforcement action against growers.

—The Congressional Office of Technology Assessment concluded in a recent report that the government’s pesticide monitoring effort is totally inadequate because of serious limitations in testing methods and because of time and resource constraints.

These three important sources of information still have public credibility.  The bottom line is that consumers are frustrated and uneasy about what they perceive as serious gaps in federal enforcement of food safety laws.  We certainly sense that in our work.

One of our recent initiatives involved asking people to circulate a petition citing concerns over pesticide and drug residues in food.  It called on state and federal policymakers to do more to help farmers produce food with fewer chemical inputs. More than 2,000 local people took these petitions out and collected more than 130,000 signatures.  It took little effort on our part to get this strong response.

Our sense is that people have become totally frustrated with federal regulatory efforts and are looking elsewhere for help. They are getting response from both state government and the marketplace.  The supermarket industry, unlike some segments of agriculture, is listening and responding:

—More than 1,000 of the nation’s 17,000 supermarkets are testing for pesticide residues, using a private company that certifies the absence of residues of certain pesticides at detection limits much lower than legal tolerances.  One result is much more pressure by the chains on their suppliers.

—A task force organized by the United Fresh Fruit and Vegetable Association held a major meeting last month on organic food standards.  It included representatives of organic grower groups and the organic food industry.  Its main announced purpose was to come up with national standards that can be added to the 1990 farm bill.

The supermarket industry, like agriculture, was shocked by the Alar reaction.  We agree in many ways with the director of public relations of Kroger, who said in a recent speech that two positive things resulted from the Alar publicity:

1) The food industry was made even more aware of glaring inadequacies in federal food safety testing.

2) All segments of the food industry were energized to think again about how they deal with customers and to focus renewed attention on their relationship with produce suppliers.

We have published a report on state government initiatives and actively encourage consumer groups we work with to support these efforts.  The report, which covers 10 types of state programs, has been sent to all state agriculture departments and to many others interested in these efforts.  We keep files on what state government is doing and make this information available to those who work in this area.

We believe consumers are maturing in their understanding of the complexity of the food safety problem.  We feel they are increasingly aware of the difficulties and costs of monitoring and policing farm chemicals after they have been applied.  We find that consumers are much more interested in how food is grown and what happens to it on the way to the supermarket.

As a result, we increasingly view programs that reduce the dependence of farmers on chemical inputs as a more efficient and effective long-term response to the food safety problem.  We find that state government programs, for the most part, are taking a similar approach.

We are much involved, as many of you are, in efforts to support sustainable agriculture methods.  These methods, which include a significant reduction in chemical inputs, have genuine legitimacy in the agricultural community.  They are rapidly becoming mainstream and, I believe, have a most promising future.

I realize that you have to be aware at all times of the politics of all this and of the problems involved in trying to respond to the concerns of consumers, environmentalists, and others outside the agricultural community.  So, in closing, I want to touch on a political reality that is providing an incentive for reducing agriculture’s heavy reliance on chemical inputs.  A new report from the National Council of State Legislatures says it very well:

“Agriculture is no longer the dominant interest group influencing farm policy.  Furthermore, consensus, if there ever was any, within the agricultural community, has broken down, giving way to open political competition among commodity groups; between small and large producers; and among suppliers, producers, processors, wholesalers, and retailers.

“No single voice speaks for agriculture, and representatives of agriculture now must vie with more powerful constituencies of consumers, environmentalists, urban interests, and others for primacy over what traditionally has been agricultural policy    ‘ making.

“In short, agricultural policy is being transformed from its traditional function of achieving cheap and abundant food to incorporate additional goals of resource conservation, environmental and health protection, and sustenance of family farms and rural economies as explicit social objectives.”

We believe safe food is a high-priority social objective and an issue whose time has come.  It cannot be pushed aside in state capitols or in Washington.  It has an important place on the agenda for the inevitable transformation of agricultural policy now underway.

“Consumer pressure, as you know, is pushing the safe food issue higher on the political agenda in state capitals and in Washington.”

From 1989 to 1992, Mr. Roger Blobabum was the national director of Americans for Safe Food, a project of the Center for Science in the Public Interest (a 230,000-member health and nutrition advocacy organization.) His work included organizing annual national organic/sustainable agricultural conferences in Washington, organic and sustainable agricultural initiatives in 12 states, and helping shape the 1990 Organic Foods Production Act and push it thorough Congress.