Clarence Van Sant, who farms 135 acres of rolling land in central Iowa, has never put much stock in the advice of economists who insist farmers have to keep getting bigger to make it. 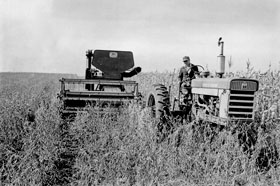 Nor has he accepted the suggestions from his land grant university and others that you have to apply a wide range of farm chemicals and use medicated feeds to get good crop yields and produce healthy livestock and poultry.

Van San switched to organic farming in the early 1960s, building up his soil by rotating crops and practicing good conservation. The result is a family-type farm that is sufficient, profitable, and ecologically sound.

“At the time we moved on this farm, the east side had a red-looking soil,” he recalls. “The topsoil is black and fertile now and, as I look back, I realize it had a very low humus content at that time.”

The marketing problems faced by many organic farmers also was overcome two years ago when Van Sant and his wife opened a health food store in nearby Grinnell. Their full line of organic foods includes eggs, whole wheat flour, pork, sweet corn, and edible soybeans produced without chemicals on their own farm.

The farm looks and sounds like the family-type units that dominated the Iowa scene in years back. A farm dog announces your arrival, half-grown pigs look up from a cool mud bath, hens sing in the chicken house, and a lonely Charolais bull rattles the sides of his reinforced pen.

Attendance at an organic farming meeting challenged Van Sant’s thinking and convinced him he should consider giving up chemicals. He was most impressed, he says, with statements regarding the buildup of earthworms on organic farms and the part their castings play in developing topsoil.

“I realized that at the rate we were losing soil to erosion we had to find a better way to build fertility,” he recalls. “We had to maintain, and increase if possible, the topsoil on our farm and I knew that we weren’t doing it.”

He said he also had become concerned about the continued use of chemicals when a sample taken from the well on the farm showed a nitrate level well over the danger line. The water was being used for both family and livestock purposes.

Van Sant make the final decision to try the organic method after attending more meetings and learning all he could about it.

“We went all the way on our whole farm,” he says. “We just decided we had better have faith that this miracle of nature would take place and that we could make it a paying proposition.”

Farming organically meant, among other changes, switching to the chisel plow. Van Sant purchased an eight-foot model and pulls it with a 460 Farmall tractor.

“That was a harder step for me to take than it was to switch to organic farming because I had always used a moldboard plow,” he recalls. “We learned, for example, that chisel plowing should be done in the fall so the ground has all winter to get mellow and to soak in moisture and so the clods break up easy in the spring.”

Van Sant has two crop rotation plans going on the farm–one for the good ground on the ridges and one for the hillsides where soil erosion is a continuing problem. He uses a three-year oats-hay-corn rotation on the hilly ground. Soybeans follow hay on the better fields in a four-year plan that includes oats, hay, soybeans, and corn.

“We found that weeds aren’t nearly the problem in soybeans when they follow hay because the weeds are cut each time a crop of hay is taken off,” he explains. “Soybeans also build nitrogen for the corn crop to follow and you can get tremendous yields that way.”

Van Sant gets good corn and soybeans yields with this rotation. His soybeans have been running around 45 bushels an acre, well above the average in his area.

“Our yields have run as good as the neighbors’–every bit as good,” he reports. “and quality-wise the crops are better.”

Van Sant says the answer to the weed problem, in addition to crop rotation, is timing. That means getting into corn and soybean fields with a rotary hoe to tear up the weeds when they’re small, then with a cultivator to cut off and cover those that are left.

Spring wheat is substituted for oats in the rotation on some fields to provide grain for the whole wheat flour that is a popular item at the store. Wheat normally isn’t grown in central Iowa, but Van Sant’s has made up to 40 bushels an acre.

Hay in a rotation also is important for a livestock-grain operation that is nearly self-sufficient. Van Sant has about 30 stock cows and calves on permanent pasture during the summer and it takes a lot of hay to get them through the winter months.

He gets three cuttings of red clover and alfalfa hay, which is baled and stored in the barn. Normally this yields 3,000 to 4,000 bales of the clover-alfalfa mixture. The hay is fed to the cattle in the field until the snow gets deep. Van Sant said this keeps the manure from accumulating in barn lots during winter months when it is difficult to spread it on the land.

Van Sant is proud of his purebred Charolais herd, which provides a profitable calf crop each year. He sold most of the calves as feeders last December, a sound decision because cattle prices fell a short time later. The calves usually weigh about 500 pounds when winter sets in.

“A neighbor picked out three choice calves and paid $1,000 for them,” he reports. “We sell a lot of calves as breeding stock and have started several farmers in this area with heifers for their stock cow herds.”

The Van Sants had no idea an organic food store was in their future when they changed farming methods. It all started when they were attending a series of meetings in Mason City, Iowa, and started bringing organic food home for themselves and others who had tried it and liked it.

“Before long we had put the first of five refrigerators in our basement and were selling organic foods from our home,” Van Sant recalls. “The trade became so brisk that we decided to locate the store in Grinnell and found a vacant grocery store building that had a parking lot and the large coolers that we needed.”

This has become Van’s Health Foods, a well-stocked store on U.S. 6 near the Grinnell College campus. Customers who had come to the farm for organic foods or who had been on Van Sant’s fresh egg route in town made it an immediate success.

The store also provides an outlet for Van Sant’s hogs, which are lean and meaty and are fed out without antibiotics on organically-grown grain. They have to be butchered at a local locker plant to satisfy state and federal requirements. Customers place orders for a half or a whole hog at a time.

“We take the hogs to the locker plant to be butchered, the customer tells them how to have the meat cut and packaged, and we get the live weight price plus a premium of $5 or $6 above the market,” Van Sant explains. “We also have organic lambs available from a farm near here and our customers make similar arrangements in buying lamb.”

The Van Sants note that meat, eggs, and other products raised on their organic farm are priced lower than similar items purchased at the supermarket.

“A lot of people object to organic foods because they say the price is too high,” Van Sant notes. “But if you can sell direct from the farm to the consumer, there isn’t anybody going to beat you on price.”